Yelp Is Not Suing South Park

Yelp Is Not Suing South Park

No! It was just a Joke: Yelp is not Suing South Park 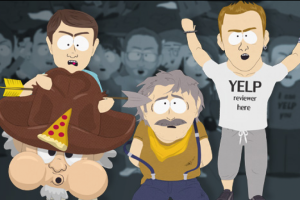 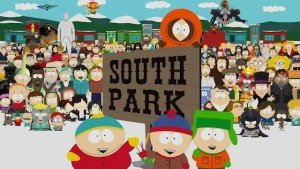 On 14 October, 2015, the US cable network Comedy Central aired Episode 4 of the nineteenth season of the long-running animated series “South Park” The show shamelessly – and hilariously – lampooned the local-business review site Yelp. Everyone in town becomes a pompous Yelp “food critic” and it ruins the restaurant business.

Millions of viewers saw the show.

A week later, an article appeared on a site called “NewsExaminer”, claiming that Yelp had filed a $10 million lawsuit against South Park and Comedy Central for their no-holds-barred lampoon of Yelp and Yelpers:

“Today Yelp Inc. filed a $10 million dollar lawsuit against the creators of South Park and Comedy Central. In the lawsuit, Yelp is seeking damages caused by the latest episode of South Park which lampooned the customer review and local business rating website”.

So far, so good. No idea yet that the article is fake. The article, written to sound like a press release, then quotes a “Paul Horner”, who is identified as a “spokesman for Yelp”, allegedly speaking with NBC News about the lawsuit:

“Our company, along with its millions of users, take Yelp very seriously. The South Park episode was in extremely bad taste and not funny whatsoever. To say our critics are out there trying to get free food and using racist slurs on little Mexican children is beyond ridiculous.”

If you hadn’t sensed by now that this whole thing is a gag, the fake press release then purports to quote a response from “South Park” creators Matt Stone and Trey Parker:

“We’ve taken a hard look at the information presented to us, and after reviewing it, we have given Yelp and their lawsuit only one star. Their lawyers delivered us legal documents in a very unprofessional manner; not bothering to smile or even a quick handshake”.
Stone and Parker’s “statement” also criticized the handwriting on the envelope and ends with the line, “In our opinion, Yelp could do a much better job by not suing us for ten million dollars”.

Anyone who has read this far and still thinks the story is genuine should not be allowed to roam the Internet unsupervised. This entire story is an invention – and a brilliant exercise in public relations strategy and tactics.

NewsExaminer is a fake news site that publishes fake, false or misleading clickbait articles. These articles are then re-posted to an affiliated site called nbc.com.co, which is deliberately made to look like the NBC News site but is in no way affiliated with NBC News.

The site lures gullible readers into thinking they are reading a genuine news article from a genuine news site. But Yelp’s response here is the interesting thing. If you take a look at Yelp’s Twitter timeline posts from October 14 (the day the South Park episode aired) you will see that the Yelp folks were very much on top of things right from the get-go. From the very beginning of the episode, Yelp’s social media people were on Twitter and posting. They asked people to re tweet if they were watching the South Park show. So they certainly knew about it while it was happening.

But did Yelp’s social media people just stumble on the South Park show and go along with it, or did they know about it in advance? Some people say the whole thing was planned – with Yelp and South Park in cahoots with each other. Each party got enough great media exposure to make it worthwhile: we would not be surprised if this entire stunt was a coordinated and planned (and brilliant) public relations stunt.

Even if Yelp were caught by surprise, they acted superbly. Rather than having to do all kinds of messy damage control after the event, they jumped in and made like they knew about it – and if they didn’t know about it ahead of time, they supported it head-on once they found it. 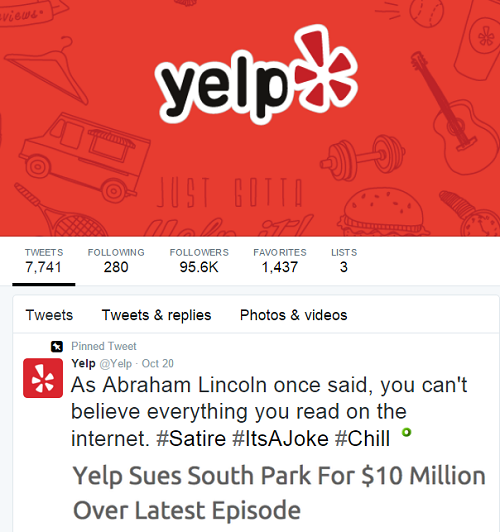 Food website “Eater” reported yesterday that a “real Yelp spokesperson” reportedly told “Eater” that Yelp has no intention of filing this lawsuit against South Park, quoting her as saying, “The rumor about a Yelp lawsuit is entirely untrue and was started by a satire site that has received far too much media credibility.”

“Eater” reports that the Yelp spokesperson also said, “We have no interest in legal action against the fantastic team that makes the South Park magic happen.”

If that is indeed a real response and not another extension of this gag, Yelp is to be commended for their cool attitude and their superb response to what could otherwise have easily degenerated into a public relations nightmare. This way, both South Park and Yelp generated great publicity.