GARBAGE DISPOSAL INSTALLATION: ALL YOU NEED TO KNOW

GARBAGE DISPOSAL INSTALLATION: ALL YOU NEED TO KNOW

And it took years and much lobbying before Mr. Hammes’ invention was able to receive wide acceptance by municipalities. Many cities thought that flushing ground-up kitchen waste into the sewer system would pollute the drinking water. In New York, it only became legal to install a garbage disposal unit in the 1990’s.

Issues to Consider When Choosing A Garbage Disposal 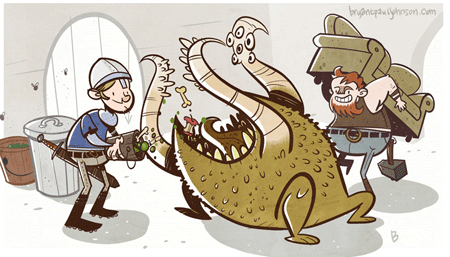 Size: A rule of thumb is “the bigger the better”. A big family needs a big disposal. But also remember that bigger means it takes up more space under your sink. Make sure you have the room for a big unit.

Type of Waste: If you have a large family or you host dinner parties frequently, you need a big, powerful unit.

Noise: Larger units tend to make more noise. Especially if you have sinks made of thin metal, you may want a smaller disposal so it makes less noise.

Grind Stages: The more stages your disposal takes to grind waste, the finer will be the residue that goes into your pipes. This will make things easier on your plumbing system and sewer.

There are several major brands of garbage disposal units. Here are the top ones (in alphabetical order):

Now you need to find the right model at the right price. Here are five excellent garbage disposal units that give great value:

If you decide to install your new garbage disposal unit yourself, follow these steps. But before you begin, make sure you follow these safety guidelines:

IF YOU DON’T KNOW EXACTLY WHAT YOU’RE DOING, CONSULT WITH AN ELECTRICIAN AND A PLUMBER.

Remove the strainer and the strainer body from the bowl. You now have a simple hole in the bottom of the sink bowl.

with plumber’s putty, make a seal and run it around the base of the flange that comes with the unit, and place the flange in the drain hole, seating it firmly.

3. Seat and Secure the Flange

Install the gasket and upper- and lower-mounting rings on the flange. Snap the retaining ring in place. Tighten the three screws on the lower-mounting ring until the flange is firmly seated. If some plumber’s putty has been squeezed from around the top of the flange, trim the putty and then clean the sink

5. Connect the Garbage Disposal to the Electricity

The main reason why kitchen garbage disposal units fail is because people do not use them correctly. If you follow these steps, and regularly maintain your system, it should function well for a long time and not give you any trouble.

Want to Get a New Garbage Disposal, If you are in Los Angels, CA call Us and you will get a great deal installation included.