NEW Garbage Disposal Installation – Is It a Good Idea?

Should You Install A Garbage Disposal Appliance? 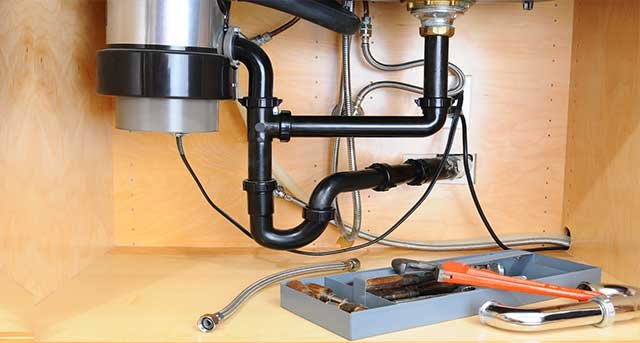 In general, women want a garbage disposal installed in the kitchen: men seem to care less than do women. If you install the appliance correctly and the USE IT correctly, you will have no problems. But if the unit is not professionally installed or you don’t use it the right way, you will have problems ranging from unpleasant odors to blocked kitchen waste lines. We are often called out to unclog kitchen waste lines because the householder has not been using the garbage disposal appliance the right way.

The kitchen sink is not a trash can. Just because you have a garbage disposal unit, it doesn’t mean that you can just throw anything into it. Ground up food waste still has to travel down the pipe and away from your sink.

Grease Is The Prime Culprit

A Fat NO to Grease into Garbage Disposal!

Grease or fat is a leading cause of kitchen sink stoppages. If you flush your garbage disposal unit using warm water, it melts the grease and the grease starts behaving like water. When it cools, it will harden in the pipes and cause a bigger problem down the line. Always flush your garbage disposal unti with cold water, and keep the water running for about a minute after the grinding has been completed. This will move the ground-up waste away down your pipes without any problems.

When you need to clean your garbage disposal unit, there are several different methods suggested by professional plumbers. One of the most recommended methods is to throw in some ice-cubes and grind them up. Flush with cold water when the ice is all ground up.

A second popular method of cleaning out your garbage disposal unit is with a lemon. Cut up a whole lemon and place it in the garbage disposal. Again, flush with cold water until the lemon is all ground up.

Tips For Troubleshooting Your Garbage Disposal

Sometimes the unit hums but does not spin. This usually means that there is a foreign object/substance jammed inside the unit. Before you try and make any repairs to the flywheel, turn off the power at the breaker to avoid electric shock. Never put your hand inside the garbage disposal. Use an Allen wrench and place it in the middle of the bottom of the unit. The move the Allen wrench about – both clockwise and counter clockwise -until the unit spins freely.

Then remove the Allen wrench. If you don’t have an Allen wrench, you can also use a broom handle or a thick wooden spoon to dislodge the blockage. Once the blockage has been removed, the unit will again spin freely.

With a flashlight, inspect the inside of the unit. If you find something there that shouldn’t be there, use something like a fork or a pair of tongs remove the object. Then turn on the water and run the system. If you still hear a grinding noise, you have not yet removed the foreign object from the unit.

If there is no sound whatever coming from the unit when you run it, you will need to reset the unit. On most garbage disposal appliances, there is a reset button on the bottom. This button is usually red, and should be visible from the base the unit. After you have pushed in the reset button, try running the unit.