Flint Michigan Replacing All Its Pipes With Copper

Flint Michigan Replacing All Its Pipes With Copper

The mayor of Flint, Michigan, Karen Weaver, recently announced that the city intends to replace its entire system of outdated water pipes with copper piping.

Unless you’ve been living under a rock for the past few years, you know that there is a serious problem with the water in Flint: a large amount of lead and other bacterial contaminants has been detected in Flint’s water, making it unsafe for human consumption.

Before 2014, the city of Flint got its water from the Detroit municipal system. Then, to save money, Flint decided to cancel its agreement to carry Detroit water and to connect Flint’s system directly into the Flint River for its water.

And that’s when the trouble started. The picture below tells the whole story: 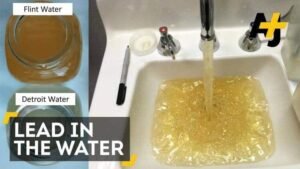 Flint residents soon noticed that the water now coming from the faucets was brown, It also tasted bad. Then e-coli was found in the water.

And children started getting sick. Some officials now believe that every child in Flint has suffered damage – probably permanent – from the lead in the city’s water supply. But since the problem was discovered, officials have done nothing but back-pedal and minimize the dangers. Now that the dangers have surfaced and are known to everyone, the city has decided to make some changes to fix the problem.

And the solution chosen was copper piping: the entire water system of Flint is now about to be replaced with copper piping.

Copper is considered to be the best material for the transportation of water. It’s been used since ancient Egyptian times, and copper has also been found in Roman plumbing, even though most early plumbing conduits were originally made of lead. The word “plumbing” comes from the Latin word for lead – “plumbum”. But since the 1940s, lead water pipes in the United States began to replaced with other, safer alternatives, the most common of which are made either of copper or a of hybrid of plastic materials called “PEX”. Even though copper piping is more expensive than PEX piping, copper was chosen for repiping the city of Flint for a number of reasons: Copper plumbing pipes are highly durable, so they can last 100+ years, and are very weather resistant, so they can be used both outdoors and inside the home. Copper pipes are also very resistant to corrosion, and will stand up to fire way better than PEX pipes will. Copper piping will last longer, too: copper piping comes with a manufacturer’s warranty of 50 years, while PEX piping is only guaranteed by the manufacturer to last for 25 years. See this article for more on the differences between copper and PEX piping.